Minn-Kota Ag Products is a Grain Marketing and Production Agriculture Supply Company. We are located in the Southern Red River Valley of Western Minnesota and Eastern North Dakota. The farming industry has expanded at great lengths and Minn-Kota Ag Products is there to provide area farmers with their entire Chemical, Fertilizer, Seed, and Grain Elevator needs. Deep Band Tillage, Soil Testing, Lime Spreading, Chemical Application, and Fertilizer Application are just part of the wide variety of services we offer.

In 1955, the company expanded and formed Schuler Inc. with the purchase of assets from Cecil McDonald. These assets were a grain elevator facility used primarily for storage in Moselle, ND and a seed plant and vacant elevator lot in Barney, ND which they later built the Barney grain elevator facility on. On December 3, 1956 the then 20-month old Barney, ND facility caught fire and was completely destroyed. The second Barney elevator was built and began operation in August of 1957.

On January 4, 1958, George Schuler Sr passed away and management of the company fell under the responsibilities of George Jr and Robert. In 1960, the Schulers purchased the Kent Farmers Grain Company from Garret Grain Company. In 1964 they purchased the Farmers Union Grain Company, also located in Kent, MN.

The Schulers continued to operate and expand the three grain corporations through the 1970s and early 1980s. In 1985, George M Schuler III (Jody) took over the corporate responsibilities for the three grain companies, merging them into Minn-Kota Ag Products, Inc.

In 2001, the grain handling equipment from the Moselle, ND location was moved to Barney, ND and the Moselle elevator was demolished. 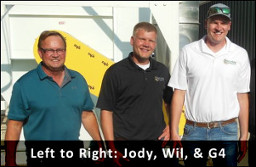 In 2002, Minn-Kota again expanded, building a new grain shuttle facility in Breckenridge, MN. This was the first shuttle train facility located on Red River Valley and Western Railroad and one of the first in our region.

In October of 2005, Minn-Kota purchased the assets of the Wyndmere Farmers Elevator and began grain handling and agronomy service operations out of the Wyndmere, ND location.

In the fall of 2013, Minn-Kota purchased the former Froedtert malting facility outside of Wahpeton, ND from Riverland Ag Corporation. In 2015, on land adjacent to the malting facility they built a state-of-the-art, 20,000 ton, declining weight fertilizer terminal which further expanded agronomy operations.

In February 2021, Minn-Kota purchased the assets of the Colfax Farmers Elevator and began grain handling and agronomy service operations out of the Colfax, ND location.